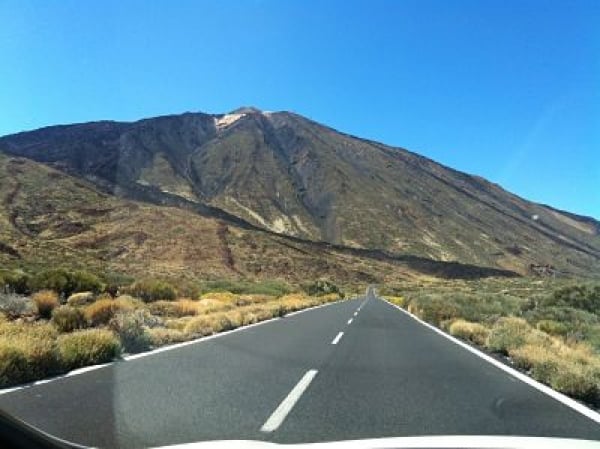 On Tenerife we drive on the right hand side of the road the same as Spain and mainland Europe, with the drivers controls fitted on the left side of the car.

The roads on Tenerife are for the most part in good condition. The traffic is lighter than in the UK, the exceptions to this are in the city areas, and some junctions approaching the TF1 motorway during rush hour.

The TF1 motorway links the island from Adeje and the southern resorts, and runs to southern tip of the island following the eastern coast up to Santa Cruz in the north east. From here it goes north up past La Laguna and back down to the northern coast of the island, heading west past Puerto de la Cruz and ending at Los Realejos. The TF1 motorway is currently being extended from Adeje up the south western coast.

Some roads in the mountains twist and turn with some precarious hair pin bends over high cliffs, and there is often mist and fog at altitude.

On Sundays and public holidays some petrol stations in rural areas are closed.

The wearing of seat belts is compulsory, children under 3 years old must travel in fixed child seats, and children under 12 must not travel on the front seats.

Motoring offences are penalised with on the spot fines and visitors are subject to substantial penalties. Breath tests are carried out randomly and blood alcohol limit is 0.08%.

Motorcyclists are required to wear crash helmets when riding a scooter or motorcycle of any capacity.

There are parking restrictions in busy streets in Santa Cruz, Playa de las Americas and Puerto de la Cruz; you will need to buy pay and display parking tickets or risk your car being towed away.

To rent a car on Tenerife you must be at least 21 years old and have held a driving licence for over a year, you will also be required to produce a valid licence.