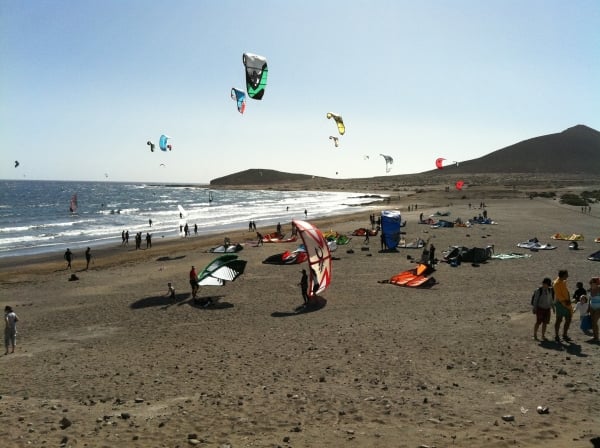 Tenerife has a reputation for sun, sea and sand, so it may be surprising to learn that there are very few natural Tenerife beaches. The natural beaches there are, are formed of black volcanic sand, pebble and volcanic rock. Many visitors are disappointed that the golden sand of the Mediterranean is absent.

Tenerife has worked hard to counteract this natural shortcoming by importing a massive amount of sand from the Sahara desert to create artificial beaches and have created seawater pools to swim in safety.

Tenerife has nearly 400km of coast line bathed by the Atlantic Ocean and the beaches usually have amenities for bathers. Some beaches are enough calm where you can take a dip with the family, or wild and windy where the surfers rule.

Playa de las Teresitas is the undoubtedly the best on the island. It is entirely manmade from sand imported from the Sahara desert in the 1970’s. A manmade stone reef protects the beach from storms and ensures safe swimming. The beach is 2km long and has plenty of facilities including palm trees to provide shade, beach bars, pedaloes and a wind surfing school.

Playa de las Americas has three small manmade beaches of sand imported from the Sahara desert that are well kept and clean. Backing the beaches is a palm tree lined promenade with cafés, bars and restaurants, many serving excellent food. The beach at Playa de las Vistas is very impressive and has an off shore fountain.

El Médano has the best of the natural beaches on Tenerife and is comparatively wild and empty. The beach here catches the full force of the trade winds and has become a haven for windsurfers.

There are some glorious Tenerife beaches but they are few in number and the best ones are manmade. There is however some totally unspoilt natural beaches of black sand that remain hidden from the uninformed tourist.

Where the coast is rugged there has been created some wonderful natural seawater swimming pools at places such as Los Gigantes, Garachico, Bajamar and Punta del Hidalgo and theLago Martiánez in Puerto de la Cruz and César Manrique in Santa Cruz which were both designed by the Canarian artist César Manrique.