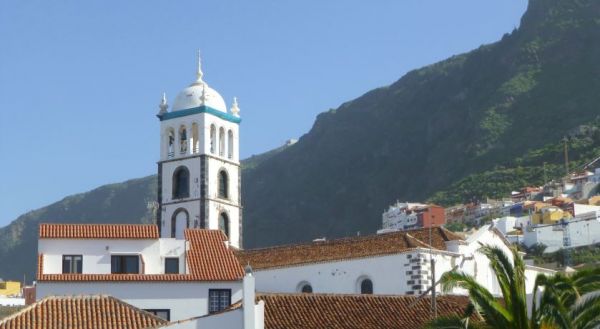 Garachico on Tenerife’s northern coast is a picturesque town worthy of a visit, although it is not really a resort, there are a handful of hotels and the town does cater for tourists. There are a few excellent restaurants, and some small bars the locals use.

Most visitors to Garachico only stop to visit and bathe the lava rock pools created when the volcano Montana Negra erupted in 1706, destroying the sea port that was at the time Tenerife’s main port. But the town’s true charm is in the streets away from the seafront, where its historic streets and buildings are.

Take a stroll around the cobbled streets and enjoy the old historic buildings dating back to the 16th century, stop to have a drink in the Plaza Gloriata de San Francisco by the church. Visit the Castillo de San Miguel, which is a fortress built in 1575 to defend the port against pirates, you can go into the castle for a small entrance fee where there is a small historic exhibition and up on to the ramparts.

The town’s main attraction is the former Convent of San Francisco which is on the town’s main square of Plaza Gloriata de San Francisco. The building houses various exhibitions, and also houses the Museo de las Naturales, which has a fascinating account of the 1706 eruption of the nearby Volcano Negro.

You must also take a look at the wonderful Hotel La Quinta Roja, which is opposite the Convent of San Fransisco. The building has been restored to its former glory, and is well worth splashing out to spend the night.

Approaching Garachico from the south has some dramatic scenery and the road down to the town is steep and very winding. Garachico was once north Tenerife’s principle port, until it was destroyed by a volcanic eruption in 1706 from the Negra volcano and completely blocked up the port with lava. The area where the sea port was is now dry land and has been built on. The town has had its share of misfortune in the past, having been afflicted by earthquakes and the plague.

Places to Stay in Garachico

Bring your swimwear with you as there are refreshing lava rock pools along the sea front where you can take a dip when the suns out. The sea can become quite rough here, and it is not advisable to use these pools, or the sea for that matter, when the sea condition is rough. The rock pools can get a bit dangerous when the sea is rough, as the sea swell surges in to the pools.

Also worth a visit is the Parque Puerto de Tierra in the Plaza Juan Gonzalez de la Torre. In these gardens stands the famous 16th century gateway known as the "Puerta de Tierra" (Land gate), that marks the former entry to the once thriving port of Garachio, and is all that is left of the original port after the volcanic destruction of 1706.

Garachico is full of charm and character, and makes an excellent base to explore the mountains of north Tenerife known as Teno Massif, however the town does not cater for tourists on the scale of the major resorts, and is really an ideal place to stay for just a few days.

Garachico will appeal to walkers and those looking of peace and quiet away from the busy mass tourist resorts. The town is very pleasant and peaceful and excellent for strolling around having a glass of wine or beer, or some coffee outside one of the cafes.

Garachico is located on the north west coast of Tenerife, its position is shown by the marker on the Garachico map. Garachico is in the region of the island known as “Isla Baja” that includes the districts of Garachico, Buenavista del Norte, El Tanque and Los Silos. The nearest large town to Garachico is Icod de los Vinos approximately 6km away by road.

You can get to Garachico by bus from the resort of Puerto de la Cruz and from the southern resorts of Playa de las Americas and Los Gigantes. Bus services from these resorts go to Icod de los vinos bus station where you will need to change buses.

Garachico is situated on the northern coast of Tenerife and has its own microclimate. During the summer months Garachico is sunny and warm, with the searing summer heat kept at bay by the cool breezes coming from the northerly ocean trade winds.

You can read more about the weather in Garachico.

Places to Stay in Garachico