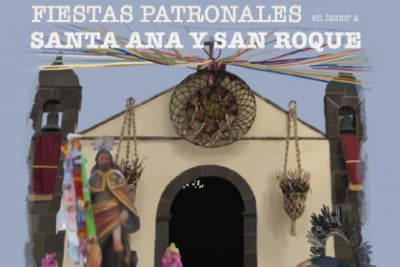 Place Garachico
More info https://www.garachico.es/
The traditional pilgrimage of Garachico in honour of San Roque is one of the most popular celebrations in the Canary Islands and has been declared National Tourist Interest.

Thousands of visitors flock to the town of Garachico to take part in one of the most authentic fiestas on the island of Tenerife. Music enlivens the pilgrimage through the streets of the town, which culminates in a beautiful maritime voyage. Early morning, pilgrims arrive at the hermitage of San Roque, and the saint's image is transferred to the Church of Santa Ana in the centre of the town, where a religious ceremony is held at midday.

At 13:00, the famous pilgrimage of San Roque begins. The image is accompanied by music bands, carts, herds, harnessed animals, rondallas and parrandas. At the same time, the fishermen of Garachico carry out the Romería Marítima, with their decorated boats accompanying the saint along the coastline.

This fiesta and pilgrimage date back to the 17th century, when the island suffered a terrible epidemic between 1601 and 1606. The main focus was located in Puerto de Garachico. However, after the sudden disappearance of the disease, the miracle was attributed to San Roque. Since then, every year, on 16th August, a pilgrimage is held in honour of the saint.