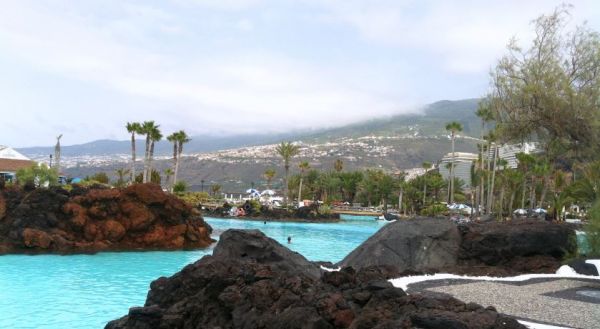 Puerto de la Cruz is the largest resort in north Tenerife, it's very popular with Spanish tourists and maintains its Canarian character. It is cooler than the resorts in the south due sea breezes and more cloud cover, which in the height of the summer can be a real advantage if you don’t like the searing sun.

The town has some high rise hotels on the sea front that date back to the first tourist boom in the 1960s. The old town and fishing port is very pleasant and charming with very historic buildings, good cafes and excellent restaurants. There is also a Lido on the seafront for those hot sunny days and is a pleasant complex of pools with islands and palm trees where you can relax and sunbathe.

Plaza de Charco is the hub of all activity in Puerto de la Cruz, it's buzzing with bars and restaurants as are the surrounding streets. The plaza itself is shaded by massive palm trees and has seats, kiosks and a kid play ground where local families come to relax and socialise. The plaza is also the venue for the town's fiestas.

The Botánico area includes La Paz which is the considered the smartest part of Puerto de la Cruz, with modern buildings and lots of bars and restaurants, although it is a bit of a walk to the centre of the town and beaches. La Paz is up a steep hill from the town centre and beaches so may not suit some people, but you can always get a taxi into the resort centre.

San Antonio - Parque Taoro is a quiet residential district someway from the centre of Puerto de la Cruz up a hill around Parque Taoro. There are no tourist facilities as such up here apart from a handful of good hotels and café bars, so you will need to head down the very steep hill to get to the main resort bars and restaurants. The very nice Parque Taoro is a tranquil place to spend some time.

Martiánez is the main tourist area of Puerto de la Cruz, located right on the seafront and promenade. This is where most of the bars and restaurants are located and where most of the resort's hotels are located. The promenade and back streets are car free zones where there are many shops and boutiques. There is also a small black sand beach here Playa Martiánez.

Playa Jardin area is named after Puerto de la Cruz best and well-kept beach. The area has bars, restaurants and some hotels.

Bring your Spanish phrase book as the main clientele are the Spanish, so some shops don’t speak English, although it is widely spoken in the hotels, restaurants and bars.

If you want to play in the sea, then head for Playa Jardin which is to the west of the resort, this is a beach of black volcanic sand. Don’t be put off by the colour of the sand, as the beach is as good as any. It also has a superb tropical garden with a maze of palm trees and a restaurant and snack bar. There is also the black sand beach Playa Martianez at at the eastern end of the resort promenade by the Lago Martianez that has a beach bar and a surf school.

On the seafront there is also the Lido Martianez, where you can swim in the saltwater pools and sunbathe by the pools or in the well kept tropical gardens.

The weather in Puerto de la Cruz reminds us of good summers in the south of England, glorious sunny days interspersed with cloudier days.

Be aware that if you are looking for some winter sun you could be disappointed with the weather here, particularly in November, January and February, as it gets a higher amount of rain fall and you may spend some of your holiday under your umbrella.

Even in the height of summer the resort is prone to cloud cover that can last for days, especially in July. If you are looking for wall to wall sun shine, you should look to go to the resorts on the south of the island.

Where is Puerto de la Cruz?

Puerto de la Cruz is located on the northern coast of Tenerife at the foot of the La Orotava valley and is approximately 90km from the Tenerife Sur airport. The location of the resort is shown on our Puerto de la Cruz map page.

The distance from Tenerife South Airport to Puerto de la Cruz is approximately 90km by road that takes about 60 minutes.