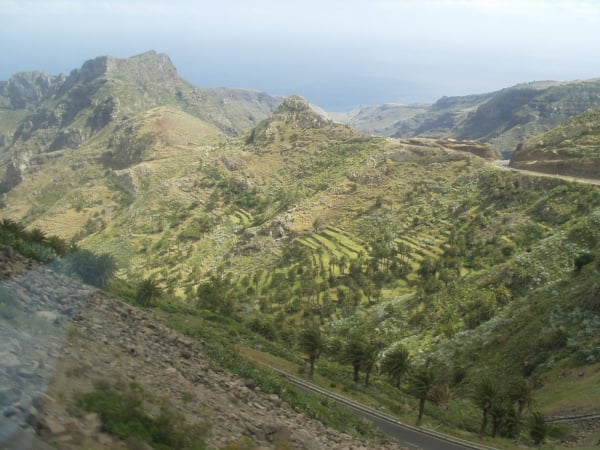 La Gomera is an island off the west coast of Tenerife and is the second smallest of the Canary Islands. La Gomera can be reached via Jetfoil in 40 minutes from Los Cristianos to San Sebastian de la Gomera.

People come to La Gomera for the tranquillity, so don’t expect much tourist activity. The only resort of any size is San Sebastian, there are a few beaches but these are small and made of black sand of shingle.

If you are going to hire a car be aware that the roads are very narrow and winding and the journeys can take longer than expected.

The island has two main types of visitor, day trippers from Tenerife and nature lovers who come in smaller numbers. Walking is very popular and there are extensive trails across the island. The centre of the island is covered by the Parque Nacional de Garajonay which was declared a World Heritage site in 1986.

The road heading north inland from San Sebastian rises steep and winding, where there are sheer drops down in to the valleys below. The peak of Garajonay is La Gomera’s highest point at 1487m and is often covered in mist and can be very chilly, but the conditions are superb for walkers and hikers.

The Parque Nacional de Garajonay is covered by a sub tropical Laura forest of the type that once covered the European continent in the Tertiary period.

The island is covered with a web of Barancos that spread from Garajonay to the coast. Much of the north and west of La Gomera is used for agriculture where bananas are the predominant crop, but the poor soil has always been difficult to farm.

La Gomera has its own whistling language that has survived from the pre Spanish days of the Guanche’s that was used to communicate across the valleys of the island. This language nearly died out but the children of La Gomera are now compelled to learn this in school.

Christopher Columbus stopped here to collect supplies on his voyages across the Atlantic discovering the Americas.

Unlike most of the other Canary Islands La Gomera has permanent flowing streams due to the relatively high rain fall.