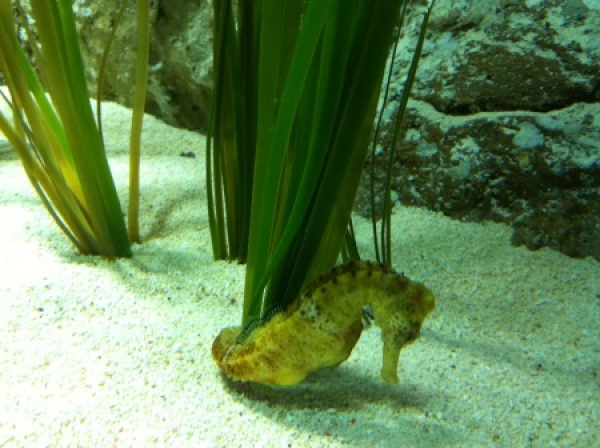 Tenerife is now known as a World class diving destination; with divers visiting from many different countries. There are many unexpected wonderful sights for the visiting diver to discover. Whales and Dolphins can be seen offshore. Angel sharks mate during the months of March and April, and can be spotted in shallow waters. Black Atlantic stingrays and other species of Ray will be seen on most dives, and especially in the area of Los Gigantes in the South of Tenerife.

There is a dive centre in Los Gigantes, this is the only dive centre working exclusively with the Seahorse Trust in Tenerife. Seahorses are very rare but have been seen off the coast of Los Gigantes by the Dive Centre. Octopus Cove is the home of seahorses, and during the summer months there appear to be a number of these little mystical creatures around. Usually you can only see seahorses in aquariums in places like Loro Parque in the North of Tenerife.

With very clear visibility, a warm sub-tropical climate, and an extremely large impressive collection of marine life, divers can enjoy all year round diving. The volcanic Island of Tenerife rises from the deep Atlantic Ocean floor. Divers can explore the enormous entrances of the volcanically formed caves that make up some of Tenerife's underwater wonders.

There are not lots of wrecks, but there is an intact wreck of a passenger aircraft in 30 Meters that had to ditch into the ocean after encountering difficulties on take-off. There are some ship wrecks around the coast line and these are often visited by large pelagic fish.

Below are a few examples of dive sites around Tenerife, although there are many more to choose from.

Playa Paraisso offers most certified divers the opportunity to see a variety of Rays, and an old anchor which has been left behind from a ship. Atlantic, Bull, and Eagle rays can be seen on this dive.

There is a Canarian fishing village on the South West coast of Tenerife, called El Puertito. The site has been cleared of sea urchins and rubbish, and Greenback Turtles were introduced to the site. This project was successful, and later on the turtles had babies. This is an interesting dive not to be missed. The turtles are very friendly, and will come over to see the divers.

In the South of Tenerife, is Palm Mar Cave. This is a boat dive with a maximum depth of 32 Meters. A statue of Virgin Del Carmen can be seen on this dive. If you head towards the cave, the rock walls of the cave are stunning. You cannot enter the cave as it is not permitted, however you will see Moray Eels and Tiger Moray Eels around the entrance to the cave. It is common for a Ray or two to appear gliding across the sand.