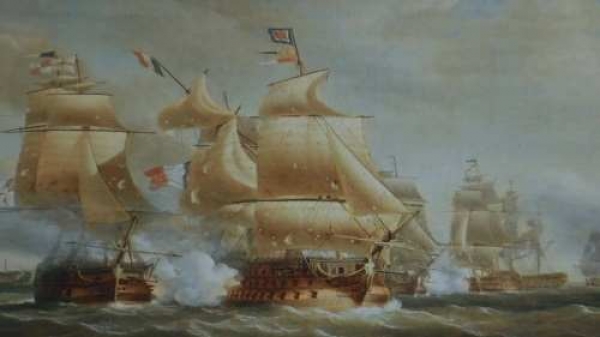 At the end of the 18th century controlling the seas was the key to world power. Great Britain was fighting the combined forces of Spain and France who were allies at the time and would fight over any port, bay or sea. In February 1797 the British defeated a Spanish squadron off the coast of Cape St Vincent, this event signalled the beginning of significant British domination of the sea.

A few months later, Horatio Nelson was placed in command of the naval blockade of Cadiz by the Royal Navy. Cadiz was an important port for Spain, being the main port for its trade with its American colonies and a nerve centre for the economy.

It was during this blockade that Tenerife was placed on a list of desirable territories due to its importance as a trading and staging post for the Spanish. It was planned that the successful attack would be a sudden blow to the Spanish treasury, which would probably result in the end of the conflict between the two powers. 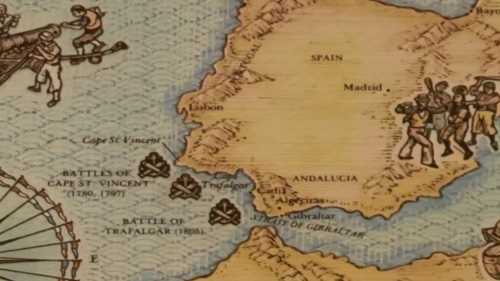 Santa Cruz de Tenerife had a population of about 8000 at the time and was the main trading port of the Canary Islands. It was also the only fortified town, the headquarters of the treasury and the post office, the place of residence of the commander and consular representatives, as well as the only port authorised to trade with America.

The large bay, protected from the prevailing winds by the Anaga Mountains, was an ideal anchorage and refuge for commercial shipping which attracted a large number of corsairs. For this reason the town was supplied with sufficient defences to protect it, and the ships anchored in its waters from attack.

An experienced commander was in charge of its defences, General Antonio Gutiérrez, who had a brilliant military career. Events started in January 1797, when Frigates of the Royal Company of the Philippines carrying valuable goods from the orient, took refuge in the bay of Santa Cruz. In mid-April, one of them was captured under the cover of darkness by two British frigates commanded by Captain Richard Bowen. 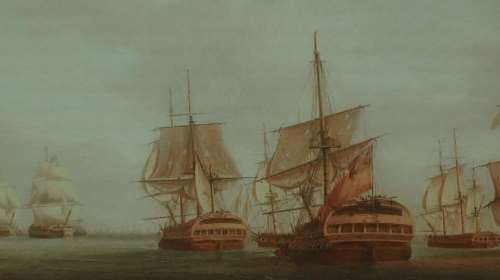 At the end of May events were repeated, when a French corvette was taken in the dark by two British frigates under the command of Captain’s Benjamin Halliwell and George Cockburn. After the success of these attacks, Nelson began to believe that the capture of the town of Santa Cruz would be an easy prize.

On the 14th July 1797, Admiral John Jervis gave the authorisation for the venture, and nine ships of the British squadron with a total of 393 canon set sail for Tenerife. Nelson and his men, chosen from the elite of the royal navy, considered the result of the attack a forgone conclusion.

Nelson’s plan was to land 1000 men to the north of Santa Cruz under the cover of darkness at Valle Seco beach, and proceed immediately to take the fortress of Paso Alto, where there was a battery of 22 canon defending the town making it an extremely important defensive position, and then to attack the town itself.

Nelson sent a letter to the commander of the forces in Santa Cruz, General Antonio Gutiérrez, demanding he surrender his troops and forts, hand over the ship ‘El Principe d’Asturias’ at anchor, the goods on board her and goods already landed.

Nelson offered an honourable surrender, but threatened to bring all the horrors of war upon the inhabitants of Tenerife, destroying Santa Cruz and all the towns on Tenerife by bombardment if his terms were not accepted. 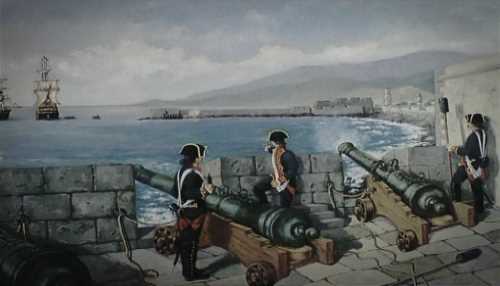 On the 21st July the town was in high state of alert. For its defence it had 84 canon with 375 artillery men spread out from north to south in 17 batteries, forts and castles. The most important forts were the tower of San Andreas, the castle Paso Alto, the fort of San Miguel and the artillery batteries of San Antonio, San Pedro, La Concepcion, San Cristobel and San Juan.

The town had about 1600 men at arms, but only 300 of these could be considered to be professional soldiers, including the infantry battalion of the Canary Islands and a group of French men from a captured corvette.

On the night of the 21st – 22nd July the British frigates had managed to enter the bay of Santa Cruz without being observed, but the unfavourable winds and powerful currents prevented a landing.

A second landing was attempted later on the 22nd July. Nelson had decided to land on a beach beyond the range of the canon of castle Paso Alto, and divided his forces in to three groups, one of which would climb the hills, which according to Nelson’s maps overlooked Paso Alto, and attack the castle from the rear. The remainder of his forces would remain on the lower part of the mountain. 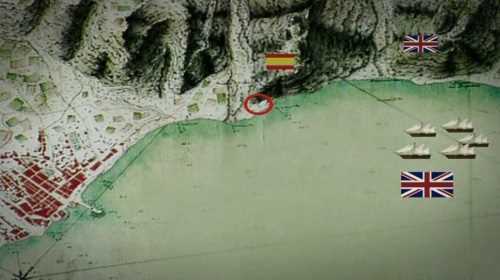 The British landing was completed at midday. Meanwhile the Spanish has guessed the British intensions and has sent two divisions to block their advance, the British were taken completely by surprise. It was at this point that the British realised their maps were wrong, and their advance to Santa Cruz and Paso Alto was blocked by the deep Valle Seco ravine.

When the British saw the Spanish forces they opened fire with their canon and the fire was returned by the Spanish artillery. After the British plan was frustrated, and having held their ground all day, the British had to withdraw that night back to their ships.

Nelson decided that the attack to take Santa Cruz should continue. His plan was to land 960 men, who were fully armed and accompanied by small canon, on to the wharf at the castle San Cristobel and capture the castle from where the Spanish commander was directing the defence. The plan of attack was based on information gathered from a Prussian deserter they had captured on land on the 22nd.

At 5pm on the 24th July the British squadron sailed into the bay at Santa Cruz and anchored at the same place as before. Within two hours, two of the British ships sailed up to the Castle Paso Alto and started a bombardment on it. This was a diversionary tactic to draw the Spanish away from their real intentions. 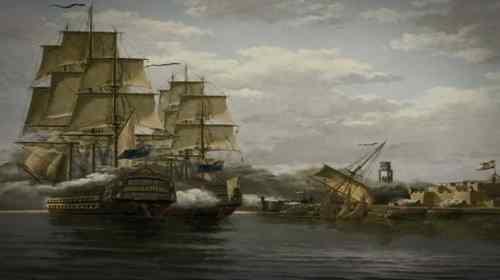 That night at 11pm, 960 men boarded launches from the squadron led personally by Nelson and began to make their way to the shore of the town. They had almost reached the shore when they were spotted by Spanish sentries and the advantage of surprise was lost.

The Spanish batteries opened fire on the launches and ships of the squadron with a heavy bombardment. Due to bad weather and harassment from artillery fire, only five of the launches reached the intended wharf and landed troops. The remainder of the launches headed south, at the same time the cutter HMS Fox was hit and sank with loss of over 90 members of her crew including its commander, Captain John Gibson.

The British landing continued under intense gun fire, but the attackers still managed to put the battery at the end of the pier out of action. At this point Captain Bowen, commander of HMS Terpsichore, was hit and killed.

Rear Admiral Nelson, just as he was stepping on to land on Tenerife with his sword drawn, was hit in his right arm by grapeshot. With his arm shattered and bleeding profusely he was immediately taken to HMS Theseus where his arm was amputated.

The remainder of the British launches, driven by the currents to the south were divided into two groups. The first landed at the beach of La Caleta and headed for the main square, but were held back by fire from the Castle San Cristobel and had to withdraw through the streets to the upper part of the town square. Here they waited for a planned rendezvous with Nelson, but this never happened. 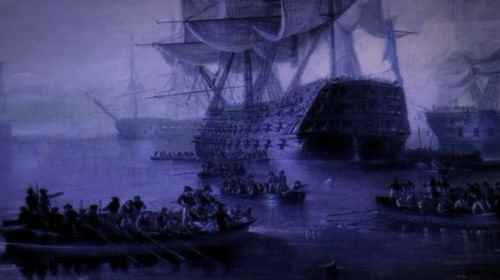 The second group landed on a beach at the mouth of the Santos Ravine, and after being held up by troops from the Canary Islands battalion, withdrew to the surroundings of the monastery of Santo Domingo.

Captain Troubridge at this point decided to try his luck and sent a message to General Gutiérrez demanding his surrender. But he refused this offer replying that he had plenty of gunpowder, bullets and men.

Troubridge and his men withdrew to the monastery and joined forces with the other British soldiers already there and numbered about 600 men. They were surrounded by the islands forces and were expecting relief from the squadron, but the launches sent were forced away from the island and fierce fighting raged all night. Help never arrived.

The British launches used in the landings left on the beach were destroyed by the men, women and children of Santa Cruz. The situation left the British with no options and Captain Hood was sent to offer their surrender to General Gutiérrez, which was accepted.

The British were allowed to leave with their military arms on condition that the squadron agreed not to disturb to town of Santa Cruz or any other of the Canary Islands ever again, to which Troubridge agreed.

By 6am on the 25th July it was all over. The defeated British soldiers paraded in front of the Spanish victors and left on boats given by the islanders to return to their ships. The treatment of the defeated British troops was very generous, the wounded were tended to in the hospital, and they were given all necessary provisions including bread and wine. 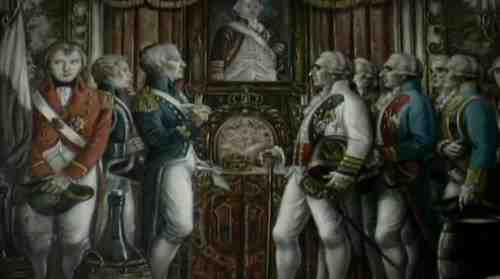 To His Excellency Don Antonio Gutierrez, Commandant-General of the Canary Islands

I cannot take my departure from this island, without returning your Excellency my sincerest thanks for your attention towards me , by your humanity in favour of our wounded men in your power, or under your care, and for your generosity towards all our people who were disembarked, which I shall not fail to represent to my Sovereign, hoping also, at a proper time, to assure your Excellency in person how truly I am, Sir, your most obedient, humble servant,

P.S. - I trust your Excellency will do me the honour to accept a cask of English beer and a cheese.

General Gutiérrez wrote back to Nelson and sent two flagons of the best wine the island had to offer. On 28th July 1797 the British squadron set sail for Cadiz bearing the report in which the minister of war was informed of the victory over the British.

In 1803, King Carlos IV gave the town the title of ‘Very Loyal Noble and Unvanquished Town, Port and Fortification of Santa Cruz de Santiago de Tenerife’, adding a third lions head to the coat of arms which recalls the three victories over the British, Blake in 1557, Jennings in 1706 and Nelson in 1797.

The city of Santa Cruz de Tenerife to this day has the events of July 1797 etched into its culture. Artefacts from the battle, including the canon known as ‘El Tigre’ renowned as firing the shot that injured Nelson, are on display in the Military Museum. The battle is commemorated every year on St James day, when the faded flags from the passing of the years are unfurled.

The defeat at Santa Cruz did not have any adverse effect on Nelsons career, importantly it cured his overconfidence that blurred his judgement in the events leading up to Santa Cruz. And as we all now know the most important part of his career lay ahead in the historic victories of the Nile in 1798, Copenhagen in 1801 and Trafalgar in 1805.

One irony of the defeat is that the city of Santa Cruz named a boulevard, Avenida Horacio Nelson, in honour of the man who had attacked them and not their defender General Gutiérrez.

24 dead and 36 wounded including military men and ordinary islanders