The Dragon Tree of Tenerife 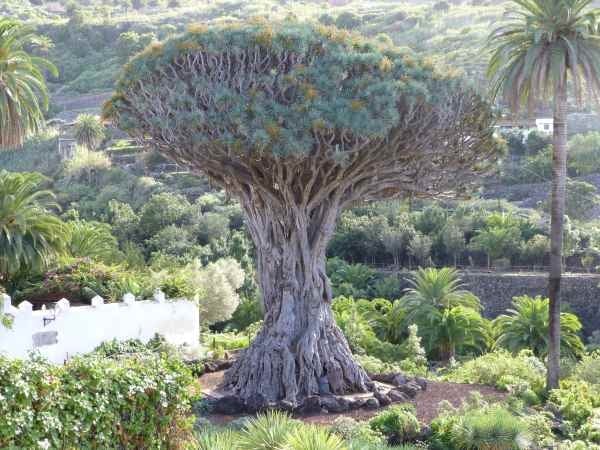 The Dragon tree is the most mysterious and interesting tree on Tenerife. It is believed that the trees live for hundreds of years, although dating them precisely is not possible as they don’t have any annual tree rings.

The ‘Dracaena Draco’ to give it its proper name, is a native species to the Canary Islands, and is used as an official plant symbol of Tenerife.

The Dragon tree get its name from the red sap the tree produces, and is known as dragon’s blood. This red resin was used in ancient times as a dye, used in medication and wound healing, as well as warding off evil spirits.

The sap was also believed to be cure leprosy and was for time exported to Italy to stain violins and marble. In medieval times this red sap was claimed by some encyclopaedias to literally be the blood from dragons that had been slain in combat.

The most famous and the oldest dragon tree on Tenerife is located in the town of Icod de los Vinos on the islands northern side. The tree is believed to have been used by the native Guanche people as a place to hold important meetings.

This tree is reputedly over 1000 years old and is known as El Drago Milenario (The Thousand Year Old Dragon), although these claims are unsubstantiated as the trees are difficult to age; this mighty tree stands 22m high with a diameter of 22m.

In 1993 a road that ran a few meters from the tree was rerouted, and the tree now stands protected in its own park setting. The city council has tried twice to have to tree listed as a UNESCO World Heritage Site in 2002 and 2011.

The trees species are a remnant from the Tertiary period and have survived the ice age where the only places warm enough for them to grow were the Canary Islands, Cape Verde Islands and Madera.

Dragon Trees are actually classed as monocots, so they are not real trees at all, but in fact belong to the same family as asparagus.