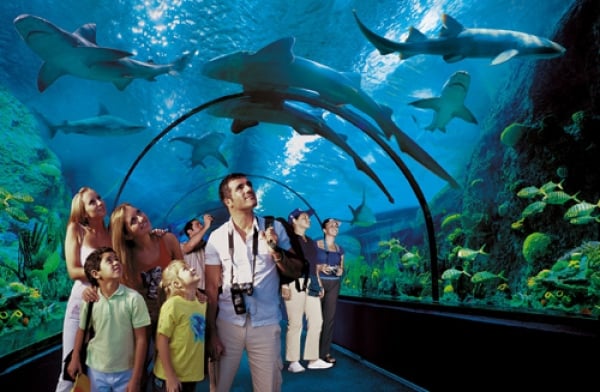 The very popular private zoo at Loro Parque is constantly adding new attractions. It all began as a parrot park where you could watch parrots performing, such as riding bicycles; I remember watching them way back in 1982. Loro Parque is now involved in important work to preserve the parrots habitat and endangered parrot species, and raises funds for conservation and research projects. It now features all sorts of animals such as chimps and gorillas, tigers, giant turtles and alligator.


There is an excellent dolphinarium and daily shows where the Dolphins will amaze you with their performance. The dolphin pools are the biggest in Europe, and can seat up to 1500 people and are the main event at Loro Parque.


There is also a Behind the Scenes tour where you can see where the dolphins train and the gorillas sleep.


There is also a Penguinarium, which is the world’s largest, where there is an authentic Antarctica eco system. Here live 3 different spices of penguin and they can be viewed through huge glass panels.


An aquarium housing over 20000 aquatic animal and plants, and an 18 meter shark tunnel where 7 different species glide above you close enough to touch is to many the highlight of their visit.


Loro Parque is located in the north of Tenerife near Puerto de la Cruz.