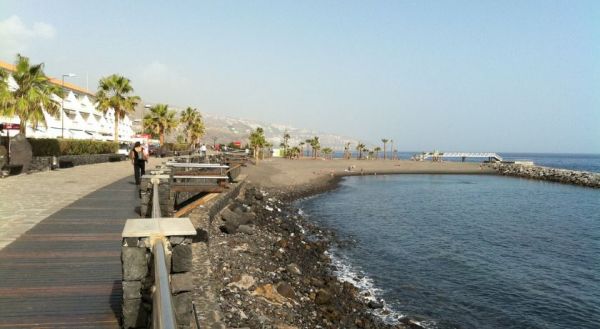 Las Caletillas is a Spanish town through and through. It is an authentic Spanish town and only has a couple of hotels for tourists. This means you are truly away from the masses of some of the other resorts, so if you are looking for something with genuine Spanish feel this could be the place for you.

As the town is a real Spanish one there is no entertainment as such outside of what the hotels may offer. The main street runs parallel to the beach promiade a bit up the hill; here you will find more Spanish bars and restaurants and some fine shops and supermarkets. You will also find some trendy bars around the town.

There are plenty of excellent restaurants along the sea front promenade, offering genuine Spanish food as well as Italian and pizza restuarants. There are no ‘International restaurants’, British bars, karaoki or restaurant chains here you would find in the major resorts. Bring your Spanish phrase book as little English is spoken. The restaurants will offer you a genuine Spanish experience with fantastic food, and all will be very welcoming and helpful as they are truly proud of the food on offer.

The small beaches are well cared for and are made up of black volcanic sand and large pebbles. There are also raised manmade beach areas with soft volcanic shingle and wooden decking sunbathing areas surrounded by palm trees. There are also small manmade coves where you can swim in the sea.

Places to Stay in Las Caletillas

There is a lovely palm tree lined promenade that runs from the Tenerife Tour Hotel for about 1km towards Calandaria, were you can take a leisurely stroll and perhaps stop for lunch or a glass of wine or coffee. Take a look at our photos of Las Caletillas

Las Caletillas is part of Candelaria to where you can walk or catch a bus. Candelaria is a pleasant town where the focus is the church on the sea front, the Basílica de la Candelaria, it is here that an annual pilgrimage is held to the virgin de Candelaria. The object of the pilgrimage is a statute of the Virgin Mary that was washed ashore during the times of the Guanches. There are also the statutes of the nine Guanche Mencey Kings in the Plaza de la Patrona de Canarias by the Basilica commemorating the original inhabitants of the island before the Spanish conquest. Here there are also several cafes and bars

Las Caletillas located on Tenerife's eastern coast 17km from the islands capital city of Santa Cruz de Tenerife, is approximately 60km by road from the main resorts of Los Cristianos and Playa de las Americas, and 46 km from the resort of Puerto de la Cruz on the north coast of the island. You can see the towns location on our Las Caletaillas map page.

Places to Stay in Las Caletillas

Sunrise On The Ocean