Tenerife Tsunami and Mega Landslides. Mega landslides on Tenerife have been the cause of tsunamis during pre-historic times and there is evidence to support this.

The islands of Gran Canaria and Fuerteventura have deposits of coral and sea shells at the height of 118 meters above the current sea level (Pérez-Torrado et al., 2006), and it has been suggested that these deposits were deposited there by a mega tsunami caused by the collapse of a flank of one of the other Canary Islands, namely Tenerife.

The formation of the Güímar Valley has been put forward as the main suspect, when an estimated 120km³ mega landslide (Masson et al., 2002) formed the valley around 830 000 years ago during a flank collapse of eastern Tenerife. This massive landslide is estimated to have caused a tsunami wave of 50m in height. Deposits from the Güímar landslide cover an area of 2600km² and as far as 85km from the coast (Acosta et al., 2003)

The massive land slide that formed La Orotava valley on the northern coast of Tenerife about 600 000 years ago, would have caused a tsunami as over 400km³ volume (Acosta et al., 2003) of land mass slid into the sea. The evidence of this massive land slide can be seen by the formation of the 10km wide Orotava valley and the scarps of up to 500 meters high that form its boundary. Deposits from this landslide are estimated to cover an area of the seabed of 2200km² reaching as far as 75km from the coast (Acosta et al., 2003). 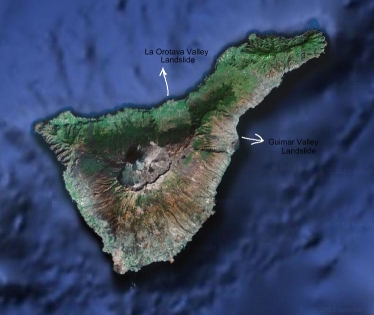 Illustration of Areas of the Tenerife Tsunamis Causing Mega Landslides

What are the possibilities of a mega tsunami in the future?

The most seismically active of the Canary Islands is La Palma where there was a volcanic eruption in 1971 from the Cumbre Vieja at the Teneguia vent. It is also been suggested that the western flank of the Cumbre Vieja volcano will suffer a catastrophic collapse and the side of the mountain will slide into the sea causing a mega tsunami that will wipe out the eastern seaboard of north and south America, the Atlantic coasts of Western Europe.

Hush now little ones! Auntie Jane is having a sunbath and trying to read her book. For our extra days spent on the Island of Tenerife, we decided to try an all-inclusive package.

The Tenerife rally 2012 (Rallye Villa de Adeje ) starts this year for the 23rd time on Friday 14th September 2012 and continues on Saturday 15th September. Friday is the day of administrative and