Siam Park Water Kingdom in Tenerife’s Costa Adeje has won the TripAdvisor Travellers Choice Award for the best water park in the world. This is awarded based on the quality of comments and recommendations on the TripAdvisor website by travellers.

Siam Park was only open six years ago and has rapidly become Tenerife’s most popular tourist attraction, and now is ranked as the world’s number one water park. This summer it was also awarded the Biosphere Park Certificate for its commitment and support of the environment by the Institute of Responsible Tourism who are linked to UNESCO. This award is given to attractions that place a high emphasis to sustainable tourism and respect for the environment.

The award was presented to the Director of Siam Park Christoph Kiessling by TripAdvisor’s representative in Spain, Blanca Zayas, on the artificial beach in Siam Park.

Other awards received are the ISO 9000, ISO 1400 and EMAS Standard, proving the parks commitment to the highest of standards 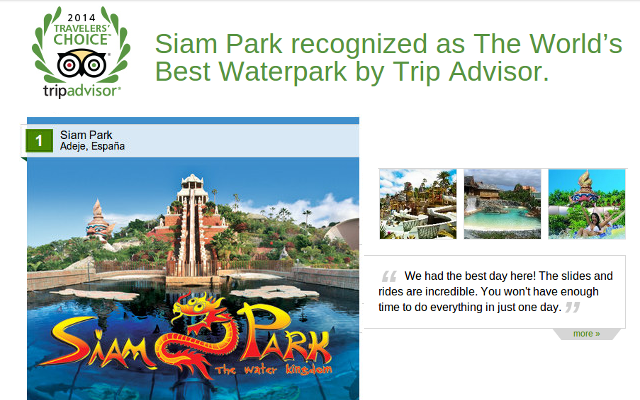 The title of best beaches on Tenerife is very subjective of course and it all very much depends on what we like as individuals. You may prefer busy beaches with plenty of water

On our last trip to Tenerife this June, we thought we would treat ourselves to a flight with BA club class. This came about due to a special offer being put in front