The theory of Continental Drift and Plate Tectonics explains the distribution of the world’s volcanos including Mount Teide on Tenerife. This theory shows that the earth’s crust is divided into plates that move over the earth’s surface, very slowly over millions of years.

At the plate’s boundaries, where the different plates meet, the earth’s crust is weak and liquid magma from the earth’s mantle flows to the surface.

This explains the existence of the volcanos that line the boundaries of the continental plates, including the mid-Atlantic volcanos, where the American and European plates are moving apart.

The volcanic Canary Islands are not on the mid Atlantic ridge, but they do lie in an area of weakness in the earth’s crust caused by the formation of the Atlas Mountains to the east in North Africa.

As the African plate moves eastward, it has led to the formation of the Canary Islands in the Atlantic Ocean in this weak spot, with the highest volcano, Mount Teide on Tenerife, rising to 3,718 meters (12,198 ft) above sea level and approximately 7,500 meters (25,000 ft) from the surrounding sea floor. 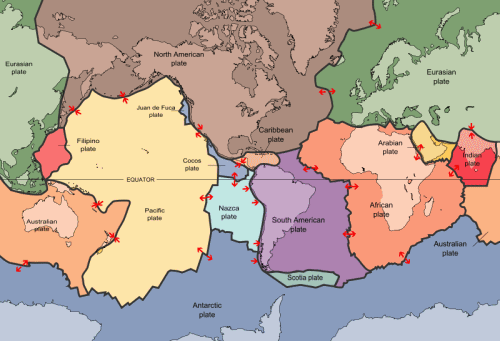 The legend of Atlantis is based on the idea that a continent lay somewhere in the Atlantic Ocean beyond ‘The Pillars of Hercules’, to the west of Gibraltar. It was thought to be

The origin of the Guanches, the indigenous people of Tenerife, is one of the great anthropological mysteries. There are currently two schools of thought on this. The first is that they came from